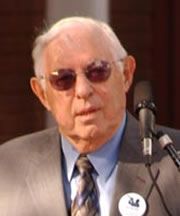 David Gold, a native of Brooklyn, NY, was a graduate of the New York City school system. He graduated from the City College of New York School of Business with a degree in accounting in 1947. Mr. Gold’s college training was interrupted when he was drafted into the Army Air Corps in 1942, serving until 1945. After being discharged, he resumed his studies while working for a show business accounting firm. He received his certificate as a Certified Public Accountant in 1952. While still working, at age 50, he returned to college again and earned a Masters Degree in business administration at CW Post College, Roth school of Business, at Long Island University.

In June 1953 he was hired as comptroller by Associated Booking , a leading booking agency, which represented many artists in the music and entertainment fields. Among its myriad clients was the the great Louis Armstrong. Joe Glaser, the founder and president of ABC, was Louis Armstrong’s close friend and personal manager. After the death of Joe Glaser, Mr. Gold was made vice-president-treasurer of the company. He developed close ties with the Armstrongs both as friend and advisor, which grew stronger over the years. Louis and his wife, Lucille, appointed him executor of their wills.

The Armstrongs had formed an educational foundation, which was not activated until their deaths, with instructions for David Gold to be its president. Mr. Gold remained with Associated Booking Corp. until his retirement in 1988, but continued his association with, and management of the Foundation to make it a model for others in its field.

Today the Louis Armstrong Educational Foundation is a major source of funding for programs to educate young children in the history of American jazz, and has provided solid financial support for educational institutions across the nation.

For many years, David Gold had been inspired by the legacy of Louis Armstrong over their long association. Gold was president of the Armstrong Educational Foundation until his death in 2009.