Lucille Buchanan Wilson Armstrong was born in the Bronx in 1914 to Maude Perry Wilson and John Wilson. She was the youngest of four children a sister, Janet Wilson Phipps and two brothers John and Nathaniel.

Raised in a stable Catholic household, her father was the owner of a fleet of cabs. The financial crash of the 1930’s destroyed the family business, which kept Lucille from going on to college after graduating from high school.

Lucille took both piano and dance lessons as a child and began her professional career at the Alhambra Theater in Harlem, went on to dance in the Broadway show “Flying Colors” and later joined the Cotton Club chorus line. She met Louis Armstrong in 1938. Louis said, “When I first saw her in the line at the Cotton Club, she was the darkest girl on the line Lucille was the first Black girl to crack the high yellow or brown bag color standard that was used to pick girls for the chorus.” Although thirteen years older than Lucille, Louis pursued and married her after his divorce. They were married in 1942 in St. Louis, Missouri at the home of Velma Middleton. She gave up her dancing career and devoted her life to being Mrs. Louis Armstrong.

Louis had lived most of his life in hotels and was not interested in living in a house when Lucille put a down payment on a home in her old neighborhood in Corona. Many prominent and well know Black artists lived in Queens at the time Lena Horne, Ella Fitzgerald, James Brown, Dizzy Gillespie and others. Louis and Lucille lived in the Corona home until their death. Armstrong died July 7, 1971.

Lucille died October 13, 1983. Lucille’s will left everything to The Louis Armstrong Educational Foundation, Inc. and the house to the City of New York. The house is now the landmarked Louis Armstrong House Museum™.

Mrs. Armstrong cherished her husband and was sensitive to his needs. She was smart and aggressive; a strong-minded female who provided the stable home life that Louis needed. She frequently traveled with him on road trips, guided his career and oversaw his finances.

After Armstrong’s death Lucille was busier than ever. She became a community activist, devoted her time and efforts to charitable and civic endeavors that benefited her community in addition to devoting time to support national and international entertainment endeavors. She hosted many meetings and gatherings at her Corona home. Her passion and interest were in further improving and developing her community; helping children and her fellowman; and keeping the legacy of Louis Armstrong alive and current in the minds of all. Below is a small list of honors, commendations and accomplishments. 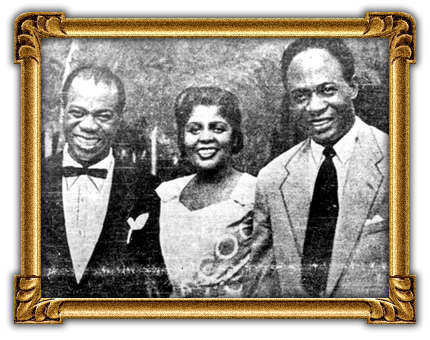 Louis and Lucille Armstrong and Prime Minister Kwame Nkrumah of the Gold Coast. This photograph was taken in 1956 during Armstrong’s goodwill visit on the eve of Ghana’s independence. 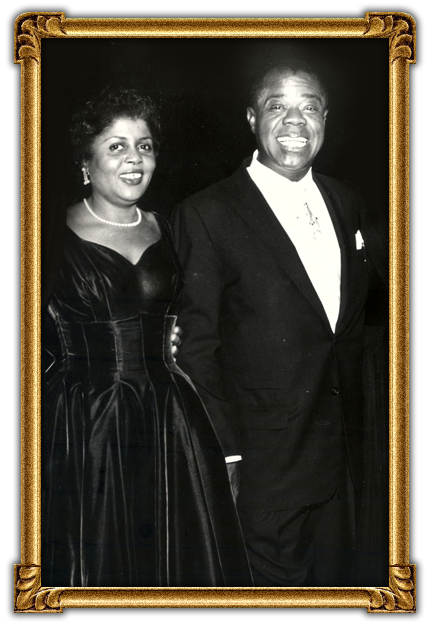 Other Accomplishments and Activities

Made honorary chairperson of the Louis Armstrong Memorial project in Corona, New York. She devoted many hours, her expertise and influence in heading fund raising events for this community-based nonprofit organization.

The subject of the documentary, “Louis, Lady Lucille.” The US government hosted a special viewing of the film, which was also shown in Iron Curtain countries.

Wrote a letter to President Lyndon Johnson and to the US Postal Service when the agency considered issuing a commemorative stamp with Armstrong’s image “This was a life of complete dedication to his music, the joy of performing, and to America and its people. I feel that as the wife of Louis Armstrong for over 30 years, the world would love and cherish the stamp as a tribute to one who gave so much of himself, his music, and his heart to the world, and to his fans.”

Worked with Congressman John Conyers and the City of New Orleans to create a park named and dedicated to Louis Armstrong.

Lucille was the subject of many interviews and conversations with Armstrong. He said to his manager, Joe Glaser, “You know how deep down in your heart that I love my wife Lucille and she loves me. Or else we wouldn’t have been together this long especially doing the crazy things I usually do for kicks. That’s why she’s smarter than the average woman who would’ve quit my old ass long ago. That woman understands me.”

Says Phoebe Jacobs, “Lucille Wilson Armstrong was a living testament to the strength and ingenuity of women everywhere. Her life is her contribution to the success of one of the world’s true musical geniuses.”

“Lucille Wilson Armstrong was a living testament to the strength and ingenuity of women everywhere. Her life is her contribution to the success of one of the world’s true musical geniuses.”
~ Phoebe Jacobs