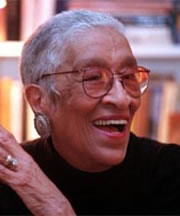 Evelyn Cunningham was a civil rights era journalist and an aide to Governor Nelson A. Rockefeller of New York.

At a time when few women worked at newspapers never mind as reporters handling hard news Ms. Cunningham covered many of the civil rights era’s biggest stories, including the battle over school desegregation in Birmingham, Ala., and the work of the Rev. Dr. Martin Luther King Jr. and Malcolm X.

She moved with her parents to New York as a child, and earned a bachelor’s degree from Long Island University.

Starting in 1940, she worked for more than 20 years as a reporter and editor for The Pittsburgh Courier, a black newsweekly with nationwide circulation. Much of that time she worked out of the paper’s New York office.

In 1998, The Courier received a George Polk Award for its civil rights coverage, and Ms. Cunningham was among five former Courier reporters who accepted it.

Ms. Cunningham took a job as special assistant to Governor Rockefeller in 1960, who had been impressed with her when she interviewed him as a candidate.

Governor Rockefeller named her to lead an office on women’s affairs, and she later served on many government panels dealing with women’s rights and community issues. She continued to advise him when he became President Gerald R. Ford’s vice president.

For several years in the 1960s, Ms. Cunningham had a radio show on WLIB in New York called “At Home With Evelyn Cunningham.”

Cunningham played a pivotal role in the establishment of the Louis Armstrong Educational Foundation. She provided legal and organizational advise to her longtime friends Louis and Lucille Armstrong. She was a trustee of the organization.

Ms. Cunningham helped establish the National Coalition of 100 Black Women, an advocacy group, and later devoted herself to charitable work, supporting many foundations and cultural institutions, like the Apollo Theater in Harlem and the Louis Armstrong Educational Foundation. “At one point when I first met her, she was on 14 boards,” said Robin Bell-Stevens, a longtime friend, who added that Ms. Cunningham often received calls from elected officials seeking advice. “They didn’t always hear what they liked, but they certainly got her point of view.”