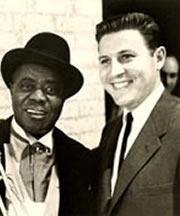 Born in New York City, Oscar Cohen started working at Associated Booking Corporation when he was fourteen years old as the office boy in the afternoons, after school. In time, Mr. Cohen became the advanced publicity man for Louis Armstrong. Having worked closely with Louis Armstrong, later on he became his road manager, and traveled the world with him. Several years later, after having served on the road with several super-attractions, he became a theatrical agent for Associated Booking Corporation, which at that time, represented such famous stars as Louis Armstrong, Duke Ellington, Pearl Bailey, Billie Holliday. Al Hirt, Lionel Hampton, Bob Hope, Noel Coward, Benny Goodman. Barbra Streisand, and Shirley Bassey. After being promoted to Vice President of the agency, Mr. Cohen is credited with developing the careers of world-renowned rock stars such as the Allman Brothers, Rod Stewart, Alice Cooper and the late Bob Marley who remained with Associated Booking Corporation until his death.

Mr. Cohen has served five terms on the Board of Governors at The Friars Club and two terms as Treasurer, and he is on the Board of Trustees for The Louis Armstrong Educational Foundation, Inc. He has received an honorary award by Rev. Ralph Abernathy from the Martin Luther King Foundation and has served as a member of many other human rights organizations such as C.O.R.E. and UJA.